Alarm systems that rely on spoken messages to warn and direct people are either referred to as electroacoustic emergency notification systems or voice alarm systems, depending on the applicable standard. Below, we use the term voice alarm for both types, provided that there are no differences between them.

The objective of voice alarm is to inform people in emergency situations using voice messages, thereby inducing them to leave a dangerous area quickly and in an orderly fashion. Voice alarm can also be used to initiate operational measures for the protection of property. The fire brigade can use such a system to issue clear instructions for targeted building evacuation. Such instructions are directed in particular to any external people present in these buildings.

The directive and the regulation, both require a certification of VAS equipment including power supplies, electronic control system (VACIE: voice alarm and indication equipment) and loudspeakers. Products certified under the CPD can still be used without any modification under the new CPR. But, under the CPR, the name of the certificate changed from “EC-Certificate of Conformity” to “Certificate of constancy of performance”, and the manufacturer has to provide a so called declaration of performance (DoP), declaring the performance of the product with regard to the essential requirements listed in the product standards.

The CPR has no influence on national application or installation standards. It affects the product only and is therefore a matter of the manufacturer.

The equipment of a VAS (meaning electronic control system VACIE, power supplies and loudspeakers) is to be tested and certified by a notified body (NB) on the following standards by the manufacturer:

We provide a wide range of certified voice alarm equipment, from electronic systems (VACIEs) including power supplies up to loudspeakers.

The EN 60849 is also called a system standard because it does not cover the application only but also the products. Since there were some discrepancies between this standard and the EN 54 standards, it was revised and will be published soon under the standard name EN 50849.

The TS 54-32 belongs to the EN 54 series but it is not a harmonised standard, therefore it is a technical specification. It was already adopted by some EU member states. It covers the planning, design, installation, commissioning, use and maintenance of voice alarm systems with specific requirements.

Both standards have similar requirements but not only for

The following table shows a comparison of both standards 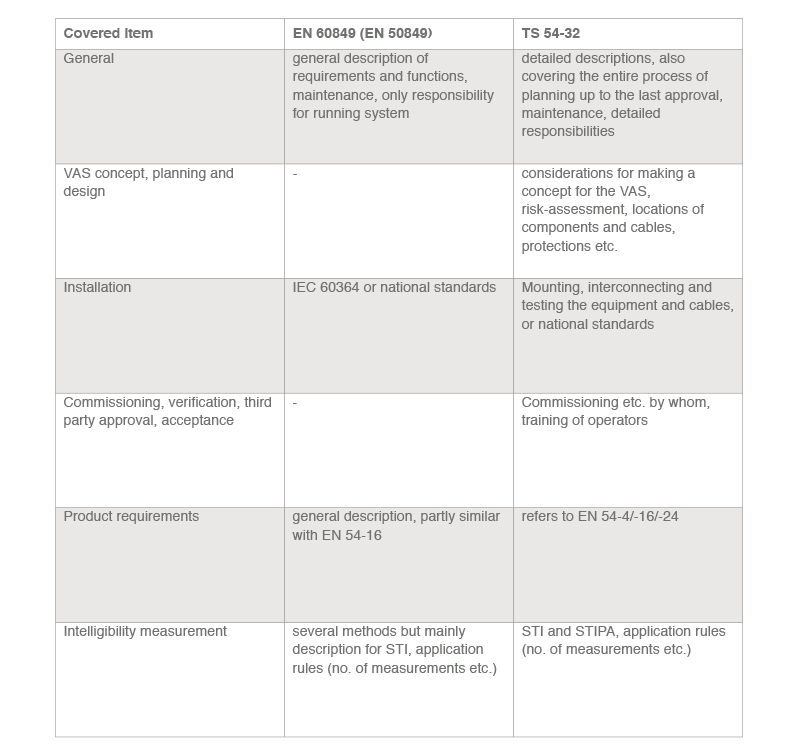