Loudspeakers and their specifications

Loudspeakers (including sound transducers) convert electrical audio signals into sound waves. They are designed for both general and specific applications, and therefore have different executions. Loudspeakers for voice alarm systems according to TS 54-24 must be certified according to the EN 54-24 product standard.

A loudspeaker that can reproduce at least the main portion of the audible range and therefore also a large frequency range (250 Hz to 6 kHz or higher).

A horn loudspeaker consists of a driver that converts audio signals into acoustic waves, and a horn that focuses and amplifies the sound waves. Horn loudspeakers are highly efficient and can achieve very high characteristic sound pressure levels.

Line array loudspeakers operate as what is referred to as a line source. The drop-off in the characteristic sound pressure level as a function of distance is less than is the case with ordinary loudspeakers. Line array systems generally have a wide horizontal coverage angle, and a narrow vertical coverage angle. When oriented properly with respect to the audience, only a small portion of the sound will strike reflecting walls and ceilings, meaning that the system generates little reverberation. Line array systems are therefore ideal for reverberant environments.

The rated power, measured in watts, indicates the electrical power that the loudspeaker is able to draw in continuous operation without distortions and without being damaged. The signals that typically require processing cause the instantaneous power to fluctuate significantly at times. This is why for low-impedance loudspeakers (without transformers, 4, 8 or 16 ohms) we state a programmatic rating, which should be understood as the recommended power output of the driving amplifier. As a result, amplifiers can accurately reproduce transient signal peaks without damaging the loudspeaker. However, if you need to reproduce sounds at constant amplitude and high power (e.g. alarms), the rated output of the amplifiers in low-impedance systems should not be greater than that of the loudspeaker.

The characteristic sound pressure level of a loudspeaker is stated in dB, measured at one watt of supplied power at a distance of one metre and is called sensitivity. No uniform notation has been defined, but the general convention is something like 96 dB (1 W/1 m). Unless otherwise stated, TOA uses the average and not the maximum characteristic sound pressure level.

The transmission range (also referred to as the frequency range or frequency response) is the range that the loudspeaker can reproduce. This information may be provided in writing (e.g. 50 Hz - 20 kHz) or in the form of a graphical representation. 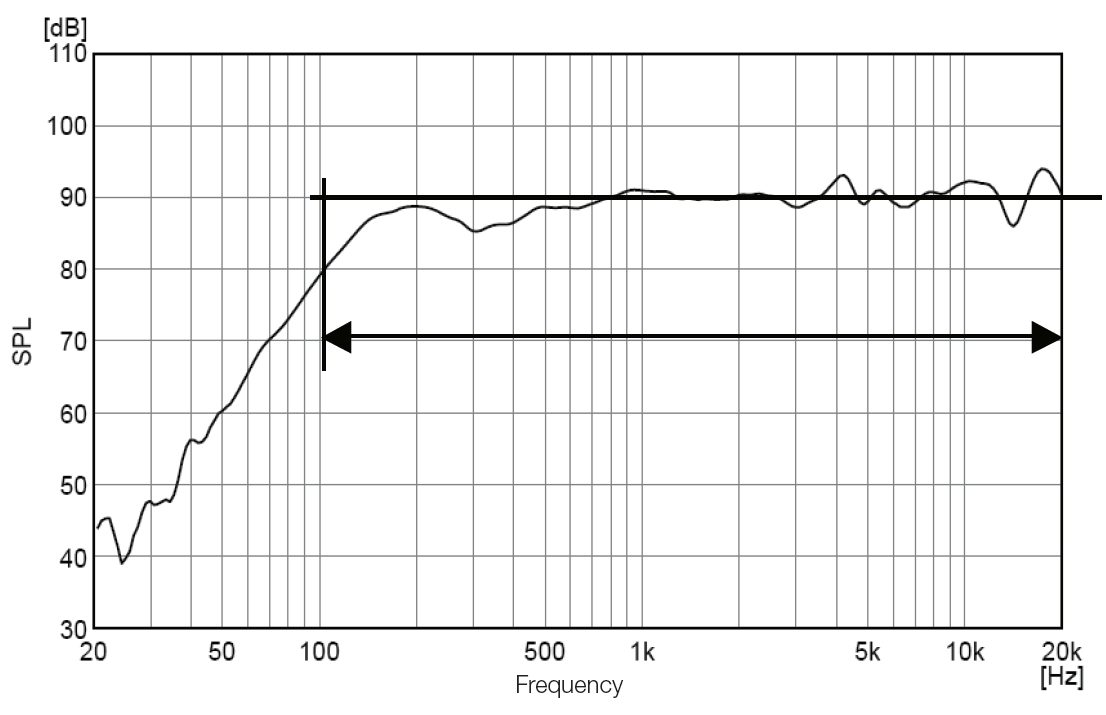 The coverage angle defines the angle at which the sound pressure level has dropped by 6 dB relative to the sound pressure on the main axis of the loudspeaker. Because this angle is frequency-dependent, it is only meaningful when stated together with the frequency to which it refers. A sufficiently high level of speech intelligibility is insured within the angle of radiation at 4 kHz. Some loudspeakers have asymmetric radiation. For these types of loudspeakers, the angle of radiation is stated horizontally and vertically relative to the main axis of the loudspeaker. Most ceiling-mounted loudspeakers have symmetric radiation. In this case, only one value is stated.