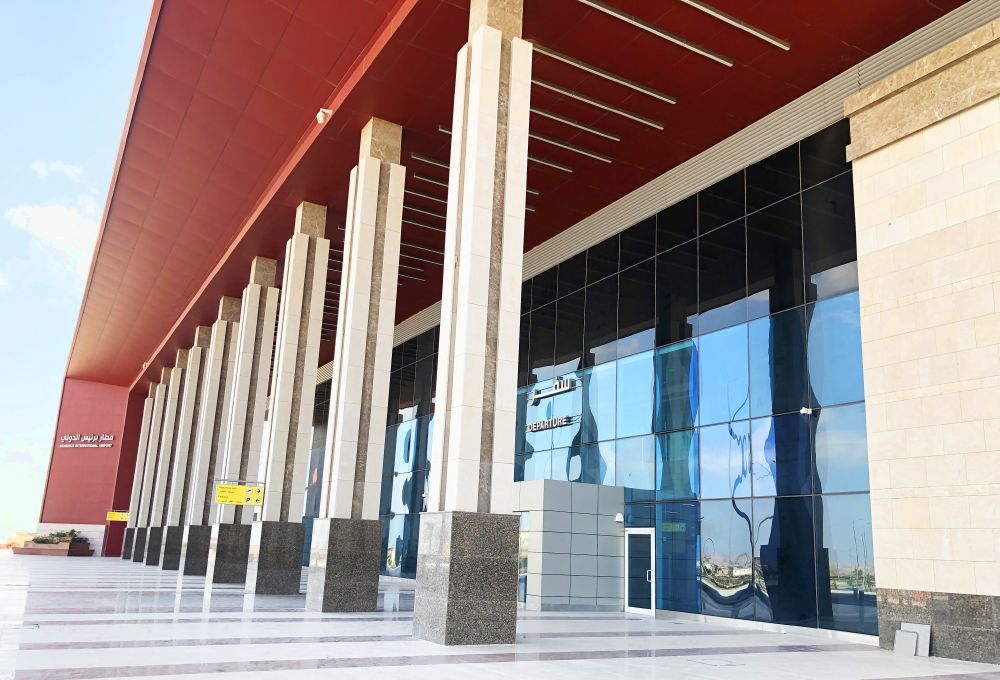 Berenice International Airport is located in Berenice City, 160 km south of Marsa Alam City. The airport is of a great importance as this region is a popular tourist destination due to its unique location on the Red Sea coast.
Both the Terminal Building (length of 130 meters and a width of 60 meters) and the Mosque Building (length of 35 meters and a width of 25 meters) are equipped with TOA Public Address and Voice Evacuation Systems. It was also decided to install an interface between TOA, VX-3000 series (Public Address and Voice Evacuation System) and AviaVox, AVX-8 speech synthesizer (Automatic Voice Announcement System).
With its very high ceiling levels (around 9 meters) and the interior finishes having very low absorption coefficients, the terminal building is considered an acoustically challenging building. (For the acoustics experts among us: In the beginning of the acoustic planning, the reverberation time (RT) of the Terminal Building (at 1 kHz) was more than 7 seconds. Due to a change in the building fabric, our partner TECO was able to reduce the RT to 2.03 seconds.) TECO was in charge of the low current systems, thus they elected and verified the loudspeakers’ types and distribution, using the acoustic simulation program EASE by verifying the relevant acoustical indices (STI, ALCONS & SPL) required for airport projects. Further tasks were supplying, installing, programming, testing and commissioning the Public Address and Voice Evacuation Systems as well as making sure that the measured acoustic indices did meet the international requirements for airports, taking the requirements of the European standard EN 54 into account when choosing the voice alarm system.
The main task for the system is to broadcast voice announcements. For this reason it was interfaced with the AviaVox Automatic Voice Announcement System (AVAS), thus putting the main focus of the acoustic requirements is on speech intelligibility. The aim was to deliver airport announcements with a high level of natural speech, in both English as well as Arabic (Egyptian). To complete the installation of the integrated system, TECO and Collins Aerospace, who were in charge of setting up the AviaVox system, worked seamlessly together. In addition, the installed integrated system is also covering the background music, paging and recorded announcements as well as the pre-recorded evacuation messages. The loudspeakers’ types and quantities (SR-H3S/H2S) were chosen based on the Electro-Acoustic Simulation Reports. The Passive Line Array Speakers offered a very good, very stable and heavy-duty solution to the Airport’s Terminal Building and the Mosque Building.
TECO made the choice to use TOA products for all buildings of the airport regarding the acoustic system, because they knew these products would fulfil all the project’s requirements. Choosing TOA, they made sure that the system itself did not add complications to the challenging project and thus were able to meet the deadlines and hand over the project according to plan. We are proud to state: TOA is the choice of experts.