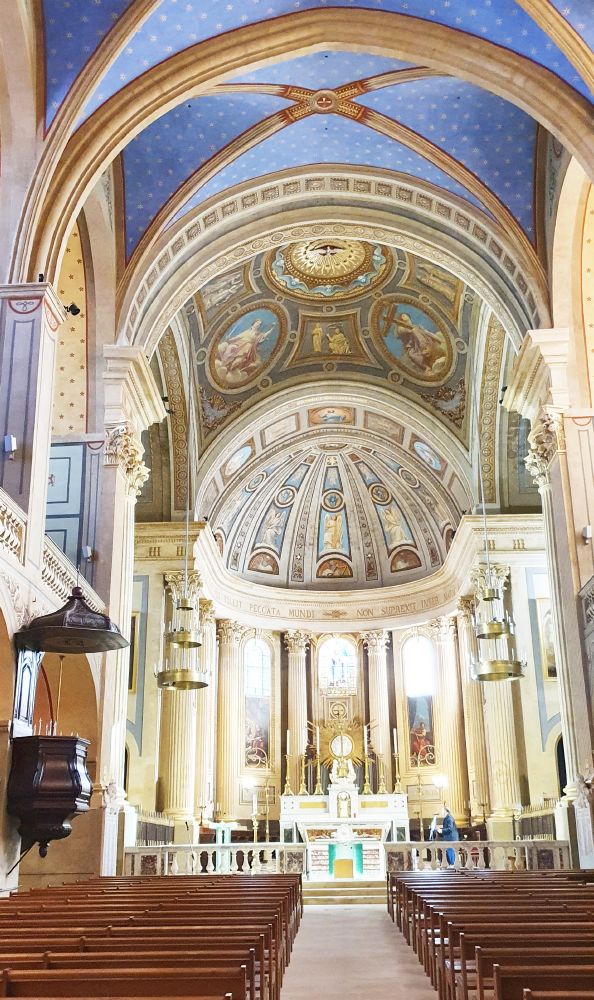 The Alès Cathedral (Cathédrale Saint-Jean-Baptiste d'Alès) is a Roman Catholic church located in the town of Alès, in the South-East of France. It was registered in the list of French historical monuments already on May 9, 1914. The paintings and decorations, dating from the 19th century, on the walls and vaults of the choir and nave have been in a very poor state of repair. Thus, they were restored during two years of work, ending with the reopening of the cathedral on 7 March 2021.

Various companies and institutions (DRAC, Occitanie Region, Gard Department and Alès Agglomeration) worked together, so that a budget of € 3.1 million for the exterior renovation and € 3.4 million for the interior renovation was available. In the interior, heritage architects' task was, among other things, to install a sound system with numerous microphones and pick-up points, that would be easy to understand for the non-technical personnel.
The requests asked for the use of column speakers with controlled directivity, also digital matrixing and amplification.

The TOA team worked with the engineering firm ADRET to compose the system along the specific set-up of the church and in regard to the challenging sound environment. The acoustic experts aimed for the best possible speech intelligibility and TOAs products were chosen to equip the church. Different speakers such as SR-H2S (Controlled Directional Column Line Arrays) and BS-1030 (2-way in-wall speaker) have been installed.

For the responsible parties, the TOA brand is renowned and the equipment is known to be efficient, reliable and of high quality. The TOA team was able to master the complexity of the site and the difficult acoustics by accompanying the engineering firm and the installer in the preliminary design studies but also during the entire construction phase and with the operators for commissioning, fine tuning and training in the use of the system. The collaboration was praised by the parties involved after the project was finalized: “The advantages of this solution are based on the digital technology of the central system, the choice of directional column line array speaker, high quality HF microphones and a team that listened to our needs and comments throughout the project.”