Safe, informed and relaxed at Airports

Airports need to make the transportation sites safe and user-friendly for all groups involved. An easy-to-orient environment with an agreeable, appealing and secure atmosphere.

How to facilitate wayfinding for passengers to make their stay stressless and pleasant?

Airports require specific announcements to be made in dedicated areas, to help guiding passengers to where they need to go.

A safe, comfortable and stress-free stay for passengers in an airport is ensured by providing and distributing information for passengers in a high-quality, clearly understandable and timely manner and only in those zones where required to facilitate their wayfinding.

Offering the sound systems and engineering capabilities required for safe, reliable passenger transit, we facilitate the accurate transmission of information to passengers and smooth communication between airport staffs.

Our solutions strive to support enhancement of passengers’ experience by enabling targeted announcements and creating a calm, relaxed environment.

In cooperation with AviaVox, TOA offers the possibility to generate automated voice announcements at a unique voice clarity using the EN54-certified voice alarm system VX-3000 in combination with the AviaVox intelligent announcement systems.

With its wide range of high quality speakers, TOA guarantees the continued surpassing voice intelligibility of these announcements even in the challenging acoustics of wide and crowded spaces common to airports. 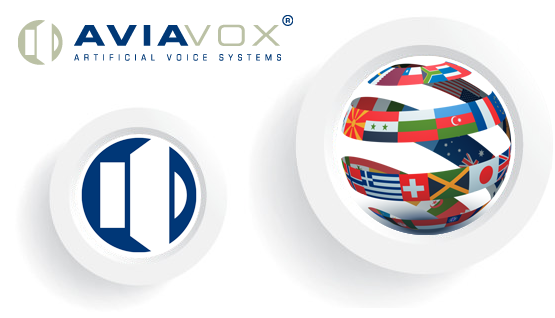 AviaVox has developed a technology with which a remarkably high level of guaranteed natural speech can be generated in over 30 languages.

The quality is unique in the world, and cannot be distinguished from a human voice.

Ever since the company started in 1995 it has worked closely with airports of all sizes, which resulted in being a global expert and market leader in the field. Over the years, AviaVox has carefully studied the operations of both airports and airlines and has embedded all sorts of useful tools and functionalities, thus implementing best practice of all these environments. Today, with information flows becoming ever more diverse, AviaVox uses its expertise to act more and more as an information integrator who brings all disciplines together to provide multilevel information to the passengers.

The AviaVox phoneme technology delivers a speech quality that is far superior to systems that are based on pre-recordings or Text-To-Speech (TTS) technology. Phonemes are very small digital speech fragments that together form a word. One single word can consist of multiple phonemes, that play a crucial role in the intonation, articulation, speed and bridging between words.

The AviaVox Systems contain artificial intelligence that controls the construction of words and grammar. In its turn, this software uses a huge voice-base with independent phonemes in order to ultimately generate multilingual announcements. The result… AviaVox makes a computer speak in many languages as if it was a living human being!

AviaVox entirely focuses on developing intelligent automatic announcement systems and services for Airports and Airlines. These systems and services can be used either separately or combined, as the topology is modularly designed. Whatever combination is used, the announcement policy of the customer is leading in how the system is being used. The software-platform enables AviaVox to tweak and tune the parameters in such a way that it entirely meets the expectations and requirements of the customer.

Throughout the years, AviaVox has developed specialized knowledge of the airport and airline operations and has tailor-made its systems and services towards the capability to integrate with the existing airport systems and operations.

That way the AviaVox systems are far more than just an intelligent automatic announcement system. Because it integrates with the Airport Operational Database (AODB), the Flight Information Display Systems (FIDS) and the TOA Voice Alarm and Public Address Systems (VA / PA). Also other structural components of the infrastructure like the Wireless Networks (Wi-Fi), the Local Area Networks (LAN), telephony switches and the Internet are being used to fully support Airport and Airline Systems as part of the daily operations, and help to maximize efficiency.

By combining TOA high-quality VA / PA systems with AviaVox human-like sounding Automated Passenger Announcement System (APAS), airports and airlines have the possibility to improve communication with their passengers on all levels. Delivering the right message at the right time in the right language and only in the PA- zones where it is needed.

Since being founded in 1934 as a manufacturer of commercial and professional audio equipment TOA has grown to be one of the world largest suppliers of commercial Public Address equipment that has become synonymous with quality within the industry. We are constantly improving our technological capabilities in areas such as acoustics, designing and networking, developing innovative products in order to provide our customers with the ultimate sound performance and peace of mind.

Thanks to 29 branches and a strong network of local certified partners TOA can give its customers the best support in more than 120 countries around the world. 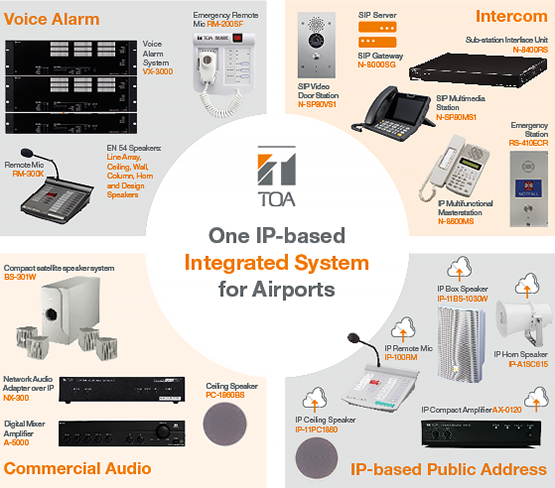 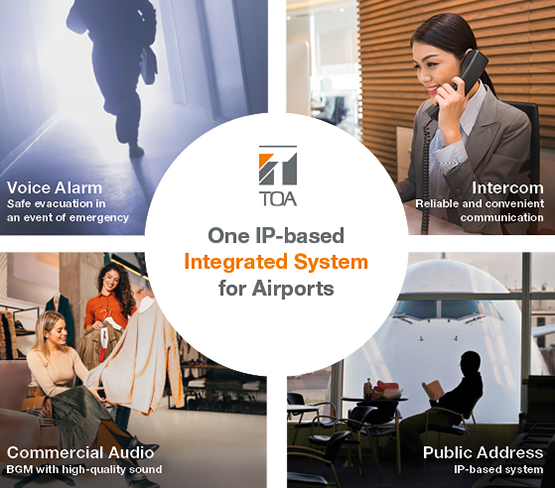 How can airports and airlines ensure that their passengers receive the right message at the right time and place?

The efficiency and speed of a passenger’s movement through the airport is of vital importance for the performance of both the airport operator as well as the airlines.

Passenger flow therefore is a key responsibility for airport operators and can be a headache without the right assistance. Airport developers try their utmost to create a natural flow to guide passengers smoothly from check in to boarding, providing commercial and entertainment facilities for their comfort underway. But still, without the right message at the right time, all this effort could go to waste and unexpected inconveniences like long waiting times, gate changes or delays may cause passengers to board the aircraft with an uncomfortable experience.

An audible announcement in a passenger’s preferred, or expected, language is a powerful tool to inform and to seduce travellers to act. If they know when to go to the gate or to cue for boarding and when to stay seated for example, they also know if there is time for shopping, dining or leisure. Research shows that passengers who are comfortably and satisfied at an airport tend to spend on average up to 45% more in retail outlets.

In this respect, AviaVox’s intelligent artificial voice systems have been developed since 1995 and in operation at airports all over the world, ranging from 160.000 to 80.000.000 million passengers per year. The developed phoneme technology has a remarkably high level of guaranteed natural speech in over 30 languages. The quality is unique in the world and cannot be distinguished from a human voice. The system fully supports airport operations and can be deployed on both terminal and gate level.

The Airport-Terminal-Client system (ATeC) is designed for use throughout an airport, and generates flight related announcements such as boarding calls, delays, gate changes as well as non-flight information such as safety and security calls.

Once a passenger has set foot in the airport terminal, these announcements all have the purpose to swiftly and safely guide him or her through the airport to the gate. With over 8.500 possible announcements in every language the ATeC more than covers the daily requirements of most airports. The creation of an individual announcement book during the implementation phase supports airports in capturing their brand in an announcement policy.

Guiding the passengers in their journey, the AviaVox system even supports local announcements in the restricted area of the boarding gate.

The Airline-Gate-Client system (AGC) is used by Airlines and handling agencies during boarding procedures. It is a powerful software tool that can be fully tailor-made for the individual airlines which operate at the airport.

The system is set-up for a step-by-step approach to guide the passenger (supporting passenger types / frequent flyer programs) through the gate to board the aircraft and has a proven boarding efficiency improvement rate of up to 14%.

When an airline agent opens the application, the software will automatically detect all the essential information of the departing aircraft at that speciﬁc gate. In other words: it will recognize the airline, the destination, the aircraft type and the speciﬁc boarding procedures belonging to that ﬂight. The graphical Interface is easy to use for the agent, and adaptions according to the specifics of the flight can be carried out by a simple mouse click. 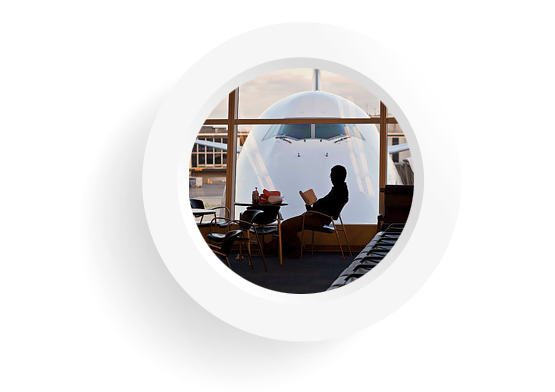 In addition to terminal infrastructure and connected gates, an airport might also use apron buses or an Automated People Mover (APM) to get passengers to the aircraft or to allow movements between different terminal buildings. For a really optimized passenger flow, passenger information is also crucial in these locations that are not directly connected to the public address system of the airport.

FlexiVox by AviaVox enables airports and airlines to deliver dynamic audio files in real time in these situations. Given the worldwide movement for example towards check-in procedures moving away from the airport and becoming more and more a part of the surrounding infrastructure, one can only imagine the possibilities when an airport can make announcements at any in-town check-in location.

Providing passengers with audible information is one thing, but what if they are also served with mobile and visual information at the same time?

With indoor wayfinding and positioning, the airport can reach passengers on a personal level. By responding to a visitor’s location, the app can assist passengers in finding the fastest route to their favourite shops and restaurants. And when using available data such as current waiting times at security checkpoint and other locations, passengers can be informed on how to use their time most effectively.

This all results in greater customer experience as an Informed passenger is a relaxed passenger with time to visit shops and restaurants; more satisfied airlines as automatic announcements at the gate increase the efficiency of their operational processes; and better airport performance because of increased gate capacity, higher passenger spending and support of silent airport policies.

In case you have any special requirements regarding your business, please don't hesitate to contact us.

We will be glad getting in contact with you as soon as possible. 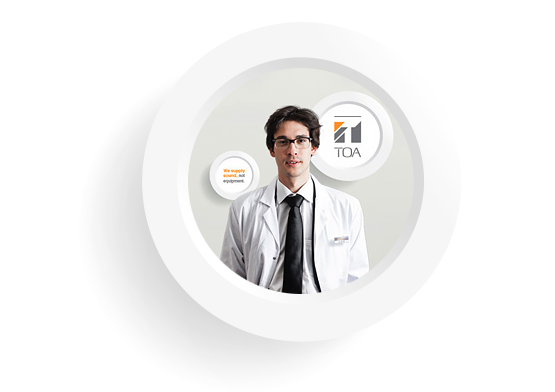